Type your search terms above and press return to see the search results.

Year 1938, Paris Fashion Week has just commenced and journalists around the world have sprung into action. Telephones are ringing haphazardly and the creek-creek, screeching noise of the fax machine has filled up the offices of newspapers, news books and magazines. Office boys are pulling together, fresh batch of faxed papers, punching a hole through them and securing with a cotton file lace. Each report is categorized with a sticky note atop, mentioning the source of news.

According to the summaries by Edith, Paris Fashion Week had huge influence of Zaza style as popularised by the leading actor of the decade, Hollywood superstar and heartthrob, Claudette Colbert. Shoulder yoke, bishop sleeves, flared full skirts, long bodices and hats were full of laces, embroidery and ribbon trims. The jewellery was grand and hair was curled with front fringe bangs. After ample deliberations on all styles and revisiting of the report, it is published with a small picture of designer, Edith Head.

But this is just the first broadcasting on the Paris Fashion Week. The sourcebooks and magazines are awaiting a comprehensive version with visual references. The tedious and meticulous work starts now. The sourcing boys are sent shortly after dialogues on the freshly received fax to click pictures of similar jewellery and maybe rent out a few from famous boutiques like Cartier and Tiffany & Co. Shoes, bags and scarves and fabric swatches were sourced similar to the description sent by Edith.

After gathering all the material and loading up studios with the season’s latest fashion, a couple of country’s premium illustrators are hired. They are called in to the studio from different parts of the nation for a month’s residency in California to study the report carefully and illustrate fashion figures based on the material sourced and the directions in the trend report. The illustrators prudently go through the papers and assembled material. They will now start translating the stylish and coveted, Paris Fashion Week into vibrant and glitzy illustrations. 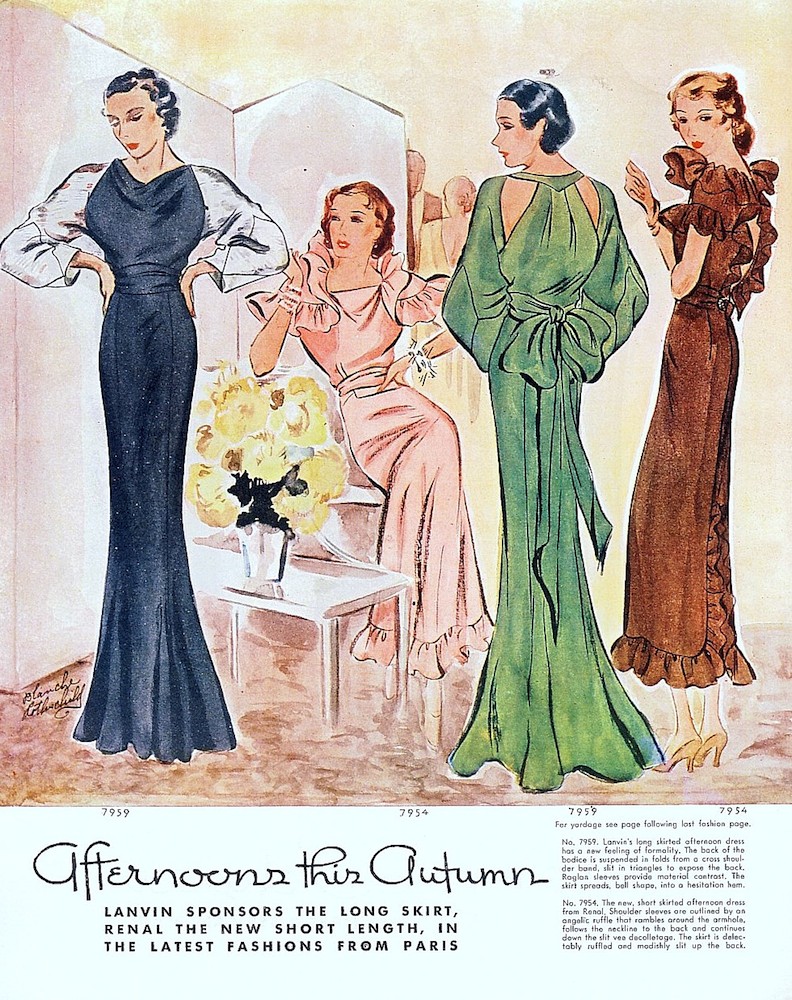 It was tough to imagine depth and contrasts used in the original garment on the basis of trend reports as there were scarcely any visual references. Though still photography was very much there, it was hard to photo-shoot the models in motion on the ramp. As a result many pictures turned out blurred. The photographers faced difficulty adjusting the shot with the model’s front halt on the ramp with an often inappropriate lighting and smoke of the burned flash. The description in words was the only foundation and sky was the limit to mind.

Thus the illustrator had the responsibility to be as close to the imagination of the garment designer. They would touch and feel the fabric samples to be able to comprehend how a silk would drape and how the newly invented velvet would change shades with every crease and fold. Paris was at the peak of fashion innovation and rest have to keep pace with it.

Only an art work or two would be published in the fortnightly newsletter and a few more in the monthly magazine. Illustrators are competing for that very spot, putting in all heart and imagination to their work.

Rest of the selected illustrations would be sent to be printed into hardbound books called “the fashion sourcebook” and this will be available by appointment only to the retailers and manufacturers at quite high expenses. The leftover illustrations will be archived for later auctions or bought by curators to be put up for exhibitions and sale.

The world of fashion was different back then. There was a reason why to some New York fashion Week appealed more than the Paris or London Fashion Weeks. The New Yorkers were the bold, flamboyant and less detailed. The Londoners were traditional and structured in dressing sense and the Parisians were the romantics with lots of embellishments and detail to craftsmanship and so on. Every Fashion week had its own character. Given the fact that the designers could only take inspiration from their contiguous environment, the influences were very regional. The incorporation of other styles from personal travel records and some information from books was considered a few times.

New York was a fast paced modern industrial city and that was reflected in the fuss free style of tops and short hemlines of skirts. The designers of Paris were more enthused by the festooned architecture and flora & fauna of France. This was all before man could register everything infinitely for reference which was accessible to the creative worldwide. And this was possible by the dawn of the age of internet and infinite data storage. This new technological advancement helped many imaginative heads around the globe to learn and visually interact with cultures and creative influencer’s work. The sphere of imagination increased by leaps and bounds.

When in earlier times, the designers had to keep in deliberation many specifics such as sourcing of materials and availability of trims, the new age designers could get everything with just a click on the computers. The unthinkable was possible and anything could be conceived by the designer or artist because of accessibility of material. Brocade from Banaras or Crepe from Kyoto, you can have anything anywhere with boundless possibilities. Fashion reached the doorsteps of everybody. As handy was fashion to everybody, as much bogus it became. Fashion suffered a major blow in terms of individuality and beauty of authenticity starting from the late eighties and early nineties.

Today with access to a million fashion websites, clothes lack the pedigree. Not pertaining to any emotional value, the garments look orphaned with beautiful but directionless aesthetics. There is no clear effect of surroundings and although there is a lot of thought and money put together to assemble the bits and pieces, they look so uniformly similar. To an extent that if you are watching a fashion show on TV without any indications or subtitles, you would hardly rule out whether it is a Milan or Berlin Fashion Week. With a few exceptions, most of the so called Avant-Garde does not seem to leave an impression whatsoever. The styles are forgettable and the only worth remembering are the revival of old ones like the “70s” or the “30s” style.  Digitization indeed robbed the fashion for you and me!

Many new ventures and brands crumbled due to similar competition from bigger fashion retailers. And this was all because of too much inspirations from everywhere. You can just not be selective as there is too much information thrown at you by the digital world. The creative minds of today need to rethink and eliminate this gap. They must isolate from this digital platform for a while and focus on uniqueness. As important is the reach of the design to everybody, equally important is the unadulterated thinking process.

Back in old times, when you would visit a new country, there was something new to bring back home as a remembrance or a keepsake from that country’s unique artistic offerings. You could pick up unique gifts for your loved ones. Today, everything is available everywhere and everything abroad looks same as it is back home.

So when I travelled to New York this time, I called Donna and asked whether she would like me to bring something for her. She paused to think, mumbled a few things before cancelling, asked and discussed for good odd 10 minutes on an international call only to say…… “Fridge Magnets”!